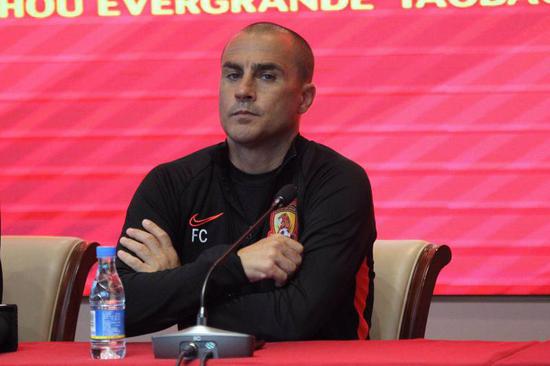 The second stage of the Chinese Super League will begin on October 16. Guangzhou Evergrande, as the defending champion, is currently preparing for the final battle at the Guangzhou Panyu base. On October 13, Evergrande sent troops to the Suzhou Division. Coach Cannavaro accepted an exclusive interview with our newspaper today. He made it clear that Evergrande must return his own Chinese Super League champion to Guangzhou!

After more than two months of closed training, Cannavaro and his children finally ushered in a rare few days of rest. "I haven't seen my wife for 8 months. This time I returned to Guangzhou from Dalian. Of course, I was the happiest being with my family." Ka Shuai said with a smile, "The night I returned to Guangzhou, I was near my home with my wife. After walking along Jiangbin for more than half an hour, I almost forgot the way here!"

On the eve of National Day, Kashuai also went to Sanya for vacation with his family. "I am really proud of China's great fight against the epidemic. In Hainan, I can hardly feel the impact of the epidemic, except for seeing everyone wearing masks. Compared with the current international epidemic, the Chinese are already free. Traveling, having a free meal, and even fans can enter the stadium to watch football, these are really incredible!" Ka Shuai sighed sincerely.

Looking back on the first stage of the competition in Dalian for more than two months in the past, Kashuai believes that he can endure all kinds of difficulties for such a long time and maintain a high degree of concentration in training games. He believes that he treats everyone, including players, coaches, and work. All personnel can only be described as "satisfied".

In terms of the content of the game, Kashuai believes that except for a terrible first half against the Dalian people, no matter what the result of the other games, none of them showed no power to fight back, so he was generally satisfied. "Every player I brought to Dalian, regardless of playing time, I am very satisfied with them. Our list is indeed rich, but some players have old injuries, and the intensive schedule also makes some players not comfortable. The rhythm and intensity, there have been some new other injuries, and even some players are still recovering. This is one of the bigger difficulties I face." Kashuai said.

On the other hand, Kashuai is more satisfied with the growth of several young players this year. He said: "I brought 5 football schools and very young players this time. They all have the opportunity to play. The goal of Evergrande Group is very resolute, which is to train young and outstanding players to serve the national team.

Regarding the goal of the second stage, Kashuai thinks that he has no idea that he must defend his title. "We are considered a strong team in the Chinese Super League. Although we cannot become stronger through signings now, there are many unique players in the team. If I can combine them to play the best, I will definitely have a chance to compete for the championship." Card Shuai confessed, "